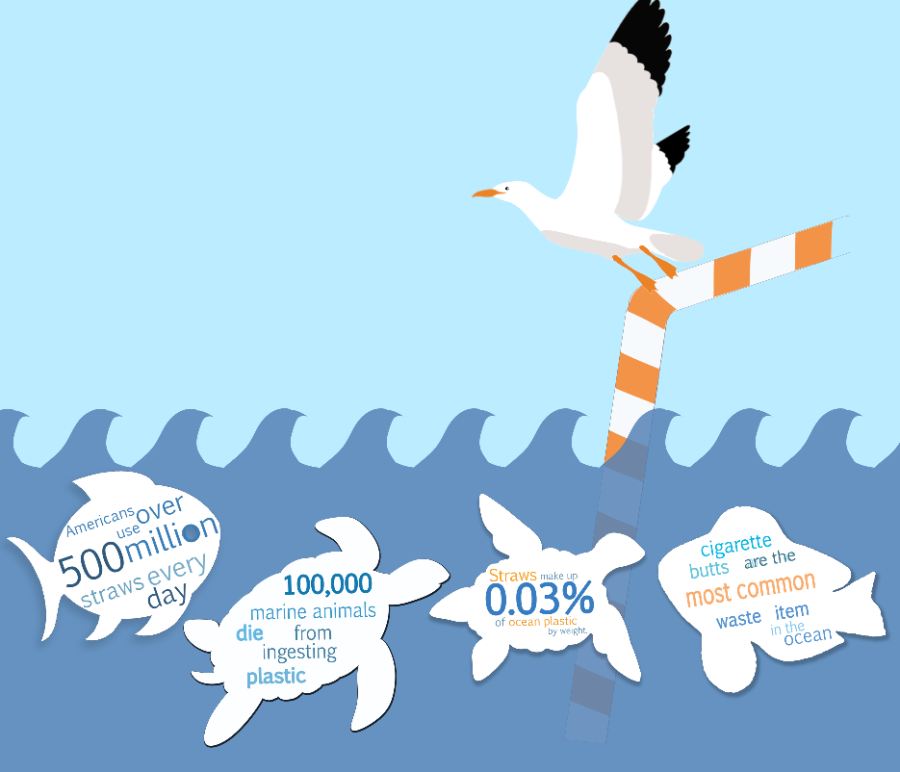 It seems that #Stopsucking may actually suck, quite a bit. This movement denouncing plastic straws has been met with unprecedented support and approval, prompting government action to eliminate straws. However, the recent straw bans are less effective than they are claimed to be. The recent straw bans barely scratch the surface of the vast amount of work necessary to reduce plastic waste, and the bans’ marginalization of the disabled community is largely unaddressed.

On Sept. 20, Assembly Bill 1884, a bill requiring that restaurants only provide plastic straws on customer request, was passed, making California the first state to prohibit the use of plastic straws in restaurants. Prior to this bill, a number of cities across the country, including New York City, Miami Beach, San Francisco and Seattle, had already taken initiative and enacted or proposed similar ordinances banning plastic straws. Large businesses and corporations such as American Airlines, Marriott International and the coffee giant Starbucks have publicly renounced their distribution of plastic straws and even drink stirrers. These bans have stirred up a strong mix of support and approval, with a shot of bitter controversy.

The straw bans themselves are actually insignificant in the grand scheme, prompting some to label it merely as a “feel-good-movement”, especially in comparison to more pressing causes linked to pollution that warrant immediate attention and effort.

“Plastic straws are quite an attractive item to target, as they are buoyant and end up floating to the top of the water,” said senior Amol Singh, president of the Environmental Impact Club. “So, it’s what people end up seeing on beaches and on the coastlines. I feel like the environmental benefits of the straw bans have been blown out of proportion.”

Straws do add to the waste in landfills and oceans, as they are often accidentally discarded during the sorting process at facilities due to how thin and light they are. Nevertheless, their actual contribution to plastic waste is trivial. According to the Ocean Conservancy, a non-profit environmental advocacy organization, plastic straws only accounted for 5 percent of the top 10 waste items collected on beaches worldwide in 2017, and even less in weight. Reducing any plastic is beneficial, but there are more efficient ways to do so.

“One action we should be taking is reducing the number of bottle caps, which make up a significantly larger portion of plastic pollution,” Singh said. “One of the most important items to target would be cigarette butts, which leach chemicals into the ocean.”

Cigarette butts are by far the most common waste found on beaches, and the number of discarded caps is more than twice that of plastic straws. Aiming to reduce these items that make up a larger percentage of plastic pollution would have a far greater impact on the environment in comparison to the reduction of plastic straws.

The fixation with plastic straws also disregards higher priorities pertaining to environmental conservation. Recycling, or the lack thereof, still remains a huge issue. Not only are many people still not recycling appropriately, but that there simply is not a reliable method of disposal for items that should be recycled. Most of the items that are “recycled” go to waste management services, which in turn ship the recyclables to other countries for processing. However, as foreign waste importers have tightened restrictions regarding what waste they accept, an increasing amount of recyclable material is going to landfills instead. Cities that struggle with this problem have to apprise residents that certain potentially recyclable items should be thrown away instead. This contradicts the message presented by the straw bans: the government-enforced bans demand communities to relinquish plastic straws, while a portion of citizens lack the opportunity to recycle plastic responsibly.

“There are several issues linked directly to environmental conservation that should be taken much more seriously than they have been in the past by government and communities, and hopefully, the new legislation signals a change in regulation,” Singh said.

As support continues to grow for the straw bans, the protests of some have been drowned out. For some disabled individuals,straws are not just a convenience, but a necessity, especially for those with limited resources and assistance. Their physical conditions may render them unable to drink without straws, and plastic ones are their best option. Alternatives like paper and metal straws all have drawbacks in terms of material resistance and heat conductivity.

“At an individual level, [the straw bans] may not work for some people,” said biology teacher Jessica Lu.  “And there’s always bigger implications, every time you make regulations and change things.”

For now, plastic straws are still fairly accessible to the disabled, being available upon request in restaurants. If the straw movement continues to ramp up speed, however, plastic straws will inevitably become less and less accessible, and may leave the disabled community struggling to keep up. As the bans continue to gain momentum, it is important that the straw policies being implemented be executed comprehensively, to avoid any unintentional effects.

Despite their shortcomings, the bans and movement have potential to change the structure of conservation action if developed thoroughly.

“[The straw ban] is an advancement,” said sophomore Aileen Mi. “It is a small step in a journey to stop environmental pollution.”

Currently, there are many limits to what the straw bans can accomplish for the environment, and it is important not to overlook them in order to keep progressing forward. If the world can effectively use this campaign to inspire concrete environmental goals, #Stopsucking can truly impact the way we continue forward in handling the protection of our planet.