I am angry that this is our reality: Reacting to the Stoneman Douglas High School shooting 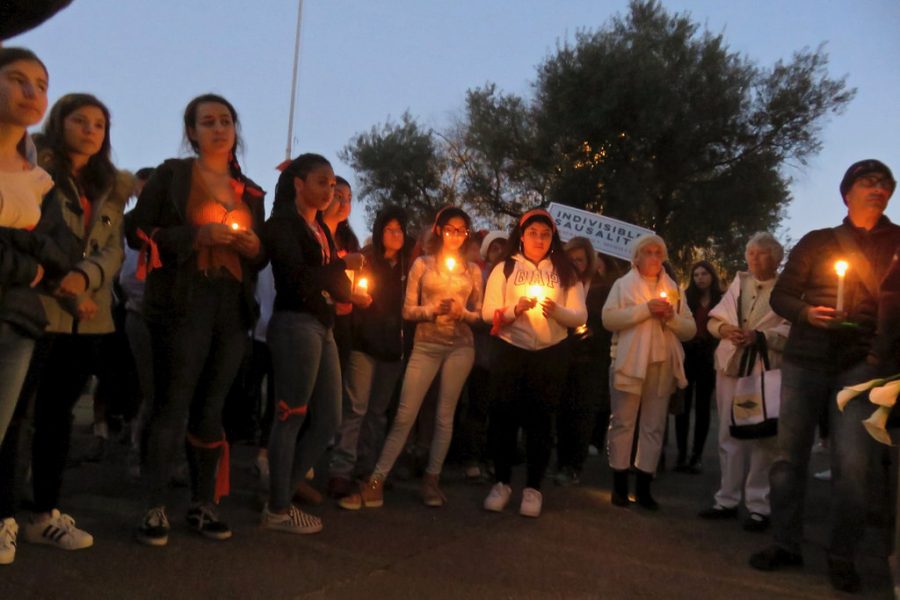 Students at Tam High School in Calif. participate in a vigil for victims of the Stoneman Douglas High School shooting, showing that the grief and anger is experienced by us all. Photo by Fabrice Florin under Creative Commons license.

When I first heard the news of the Stoneman Douglas High School shooting, my first thought was, “Another school shooting?” At this point, school shootings have become common occurrences. Within the first seven weeks of 2018, there have already been 8 school shootings that have caused injury or death, and code red drills have become routine. I was heartbroken, of course, but I did not put much thought into the subject. I have thought about it so much that these thoughts have become normal to me.

I was also scared; how could I not be? School shootings are a scary topic, the thought of dying is inherently scary, but I was no longer scared, I was just numb. I had thought about school shootings so much that each new shooting no longer shocked me. I began to brush each tragic event off because it was out of my control, because they didn’t directly affect me or my loved ones, because I feared the consequences of standing up, because I didn’t know what to do, because it was easier for me to ignore the reality of all the incidents than to accept it. I ignored them out of fear, out of hopelessness, out of indifference. These shootings are a regular occurrence, and if this is our reality, shouldn’t I just live with it?

Then, one of my teachers brought up the Stoneman Douglas High School shooting and had a class discussion on the topic. The teacher prompted us to talk about how we felt, and the class settled into an awkward silence as only three or four of the thirty three students spoke. I am forever thankful for that discussion, however, as it prompted me to further think about the topic at home, and the more I thought about it, the more emotional I got.

I started asking myself: what separates me from the students in Florida? Despite being across the country, they are high school students just like me. What is stopping someone from walking onto my campus with a gun and killing students?

I remember when the Pulse nightclub shooting occurred in June 2016: I was in New York for summer vacation. I had just come back from watching a musical, and the news of the shooting was playing on a TV in the hotel lobby. I am unsure of why, but when I heard the news, a deep panic settled within me. I remember talking to my friend that night and opening up to them about the fear I experienced. I asked them what would happen if I was a victim in the next mass shooting, and I told them that if I died in a shooting, I wanted them to know that I loved them more than anything. I had not thought about that moment until this shooting.

I am beyond scared. What if a person with a gun were to walk into Lynbrook? What if my friends die in a school shooting? What if I die in a school shooting? Where would my belongings go? Who would manage my social media accounts? Who would be there for my parents? I recently even started writing a letter for my best friend in case I died in a shooting and did not get the chance to tell them I loved them.

And the more I think about it, the angrier I become.

I am a sophomore in high school who has yet to experience the world. I should not fear coming to school, much less fear that somebody wielding a gun will shoot me while I am in school. The thought of someone coming onto my school with a gun and killing my friends, or even killing me, should not have even crossed my mind, let alone be an actual possibility.

How has it become normal to us that at any moment, a shooter could walk onto campus and kill our peers, our friends, our teachers? How have we become accustomed to the constant thought of “Hey, someone could walk onto campus and shoot me!”? How is it a fact that I have had to tell my best friend, a person I never want to lose, “If I die in a shooting, you mean everything to me. I love you more than anything.” How is this now a reality? Perhaps I am overthinking it. But isn’t the fact that those thoughts have even crossed my mind a sign of a much bigger issue?

For too long, I have failed to recognize and stand up for this issue. For too long, I have characterized my fear and anger as “normal.” For too long, I have characterized this fear and anger as the price I pay as a student for coming to school, as if the possibility of a school shooting is something I should be used to in order to gain my education. I am done brushing off these tragedies like they are “no big deal.” I am done thinking that thoughts and prayers are a sufficient response to the situation. How many lives must be taken before we can start to acknowledge the seriousness of these incidents? We have grown up with mass shootings as our reality, and we have grown numb to them. But we have the power to change this, and we will no longer stay silent.

I am scared. I am sad. Above all, I am angry. I am no longer pushing these feelings away. And I will no longer be silent.