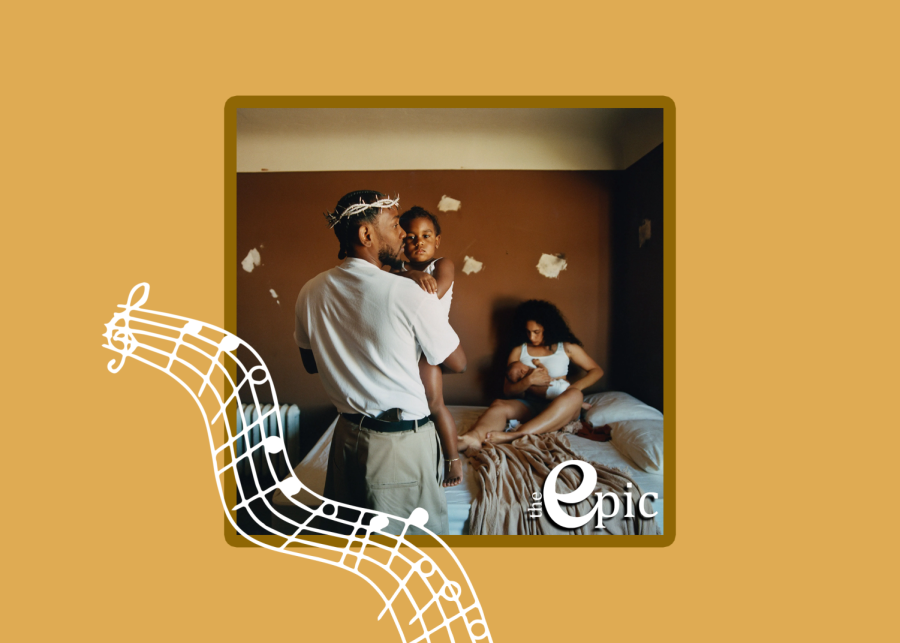 Kendrick Lamar recently gave fans a new album to obsess over, releasing “Mr. Morale and the Big Steppers” on May 13.

After 1,855 long days with music aficionados repeatedly playing Kendrick Lamar’s remarkable discography, the artist recently gave fans a new album to obsess over, releasing “Mr. Morale and the Big Steppers” on May 13. Lamar has been memorialized as a defining artist not just in the rap industry, but for his writing accomplishments and production prowess as well. His past albums reflect and satirize themes of self-discovery, community unity, trauma and racial inequality. However, each is unique in the experiences that Lamar chooses to chronicle, with his newest release being no different, as the artist grieves about family trauma and confronting his own struggles with societal expectations of masculinity.

Fans have raised thoughts that this may be his final album, as it is essentially the introspective missing piece in the puzzle of his discography. MMBS continues the diversity of Lamar’s albums which each showcases a different writing style and genre. The versatility of the artist’s talents has led to his experimentation with different forms of storytelling in music, such as a collection of short stories, feature films, poetry and satire. His iconic album “DAMN.” consists of a melange of mainly traditional rap, with each song reflecting an exaggerated and ironic interpretation of the song title.  Despite this different style, his purpose of social commentary is not lost and connects back to the themes presented in his previous album, “To Pimp a Butterfly. ”, which narrates a coming-of-age story as a young Kendrick grows up in Compton, CA. “good kid, m.A.A.d city” focuses on production dimension and can be viewed as a series of short films, with the opening notes of tracks like “Backseat Freestyle” gaining him popularity. “Section.80”, some of his earlier work distinguishes Lamar as a wordsmith, with him narrating the lives of characters such as Keisha in “Keisha’s Song”.

Lamar has been recognized for his groundbreaking contributions and performed with other musical icons Snoop Dogg, Dr. Dre, Eminem and Mary J. Blige at the Super Bowl 2022. Lamar also holds the title of being the only rapper to ever be awarded a Pulitzer Prize and has won numerous awards for his work on Marvel’s ‘Black Panther’ soundtrack. Most recently, he won a Grammy in 2022 for “Best Rap Performance” on his protégé and cousin Baby Keem’s “family ties”. Despite not releasing music himself for numerous years, Lamar’s influence on modern-day music is undeniable and can be seen through those such as his mentee Baby Keem, who continues the dissemination of critical ideas like growth and maturity through rap.

One week before the release of the album, Lamar put out “The Heart Part 5”, which discusses tragedy and the evolution of his perspective on it over time. While it’s clear that this song does not fit into the story of MMBS, it does set the stage for the ruminations in the album, marking a new era of music for Lamar. This album will be the first of his to be produced by his own new multi-disciplinary media company, pgLang. pgLang is known for creating not just music, but all forms of media, making the albums it produces distinctive. Furthermore, Lamar carefully chooses to showcase the talents of lesser known artists Sampha, Amanda Reifer, Tanna Leone and Taylor Paige, whereas previous albums have featured stars such as Drake and Rihanna. This differentiates MMBS as an album that prioritizes truth and self-reflection over catchy hooks or listener appeal.

“What is a bitch in a miniskirt? A man in his feelings with bitter nerve,” is the statement posed in “United in Grief”, opening the album and immediately introducing a main focal point in the album: traditional masculinity. Lamar maintains this idea throughout tracks such as “Father Time,”, where he narrates his struggles with his father’s expectations, and interjected emotional arguments in “We Cry Together,”depicting how toxic growing up to be a man around negative influences can be. Furthermore, the title of this first track sets the melancholic, mourning tone of the album, emphasized by the use of powerful vocals and orchestra. Songs such as “N95”, “Silent Hill” and “Savior” are more reminiscent of traditional lyrical rap, but a large majority of the tracks use sung melodies and explosive phrases to communicate Lamar’s pain and journey to heal. The insertion of clanging beats and otherwise eerie background music are similar to artists such as Radiohead and their album “Kid A,” which also emphasizes introspection. While it’s unsure where Lamar derived inspiration from, MMBS does not just mimic other popular rap albums, but rather takes on the techniques used by a variety of genres to show internal conflict.

Motifs of regret, grief, trauma, the strength of family ties and brutal honesty bleed out of this album, making it one of the most emotionally vulnerable pieces ever produced by a popular artist. Fragments of interludes and tracks such as “Crown” and “Mother I Sober” consist of outpourings of spoken word akin to those of Kanye West’s unpublished “I feel like that” and Frank Ocean’s “Solo (Reprise)”. Yet the warmer, soul-lifting beats of “Purple Hearts” and “Die Hard” showcase the diversity of the album and bear similarities to older tracks by Majid Jordan and Drake, such as “Stars Align”. The album follows the progression of a soul bearing its sins, with the artist confessing to cheating on his girlfriend, homophobia and multiple other offenses, then pleading for help.  Yet in an attempt to be as raw as possible, he makes artistic decisions that have been seen as controversial by many listeners. For example, Lamar chooses to feature artist Kodak Black, who has been accused of of first-degree sexual conduct, on tracks that discuss abuse. However, a far more risky decision was his use of the f-slur throughout “Auntie Diaries”, which some members of the LGBTQ+ community have expressed they feel uncomfortable with.

A cure to the climax of conflict Lamar describes is healing, and he chooses to repeat the necessity of therapy throughout the album, beginning with the phrase “I went and got me a therapist” in “United in Grief.” In promoting self-growth, Lamar attempts to confront his wrongs and seek aid. The final few tracks encapsulate the purpose of the album, beginning with the controversial “Auntie Diaries,”, telling the story of his transgender relative, and much like his earlier songs, the struggles of nonconformism. “Mr. Morale” and “Mother I Sober” build on each other, using riveting violin and snippets of quivering melody to speak of generational trauma in Black families. The album reaches resolution in “Mirror,” the final track where Lamar begs for forgiveness, with even the title paying homage to the benefits of reflection. He repeatedly sings “I choose me, I’m sorry,”, with a more upbeat and hopeful ambience, summarizing the revelations and opinions on trauma and coping he’s developed.