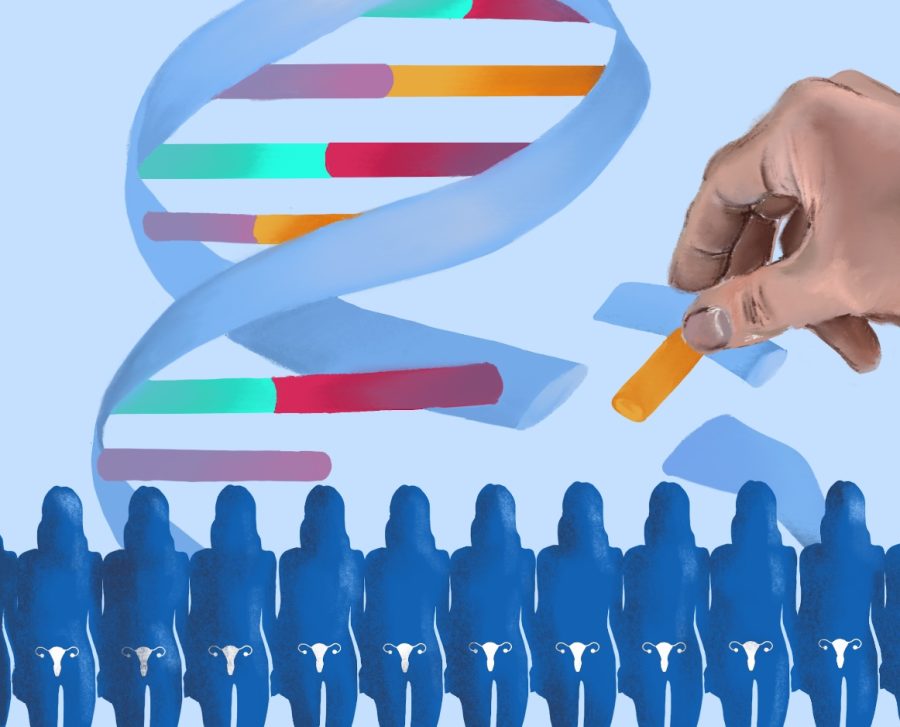 The eugenics movement, often with racist or ableist motivations, touted the concept that the human race could be improved by breeding out genetically “unfit” individuals.

White skin, blonde hair and blue eyes: the archetype of the Aryan race, deemed by German dictator Adolf Hitler to be the pinnacle of humankind. While the putative master race draws associations with Hitler’s persecution and genocide of European Jews, this linchpin of Nazi ideology has historical foundations within the U.S. decades before Hitler’s rise to power. From forced sterilization to legal policy preventing procreation, eugenics has been the dark, overlooked underbelly of American and Californian history.

Coined in the late 19th century, the term “eugenics” refers to the pseudoscience of improving the human race by “breeding out” disease, disabilities and undesirable characteristics. In its distilled form, eugenics involves eradicating genetically “unfit” individuals and preserving those who align with the Nordic complexion. Eugenicists posited that “feeblemindedness,” criminality and poverty were genetically transmissible, and they controlled the reproduction of “inferior” populations such as people of color, immigrants and the disabled.

“During the peak of eugenic popularity, eugenicists often shared a baseline assumption, derived from colonialism, that there was a neat hierarchical organization of races and that intelligent varied by race,” said Heather Dron, historian and research fellow at the Sterilization and Social Justice Lab at the University of Michigan.

Advertised as a progressive quest for healthy babies, the eugenics movement burgeoned across the political spectrum and became entrenched in 20th century America. Eugenic doctrines were codified in immigration restrictions, sterilization programs and even “fitter family contests” rooted in Anglo-Saxon superiority. In 1896, Connecticut implemented the U.S.’s first eugenics policy, which prohibited marriages between epileptic individuals. In 1927, the Supreme Court case Buck v. Bell infamously legitimized compulsory sterilization laws, opening the floodgates to a generation of minority victimization and forced sterilizations. Throughout the 20th century, 32 states contained federally funded sterilization programs, in which more than 60,000 people across the country were coercively sterilized.

“Buck v. Bell really set the precedent for the treatment of people with disabilities,” said Cat Sanchez, Co-Chair of the Stanford Disability Initiative. “This rendered people who had developmental or mental health disabilities as being lesser and having fewer rights than others.”

The propagation of eugenic initiatives across the U.S. not only controlled marginalized populations but also perpetuated the status quo, one that favored a white, able-bodied patriarchy. California, the country’s eugenics spearhead, became the third state to enact sterilization laws in 1909. For the next 70 years, California tallied 20,000 involuntary sterilizations — one-third of the country’s total — a disproportionate number of which were performed on Hispanic, African American or Native American women. Sterilization programs targeted minority populations with no due process, for anyone lawmakers deemed unworthy to procreate were forcibly sterilized.

“The category of ‘feebleminded’ applied to a wide swath of people that we might not call disabled today — people who had sexual behavior that fell outside social norms, women who were assaulted, people who scored poorly on IQ tests,” Dron said. “One of the lessons that people take from eugenics is that classist, racist or ableist assumptions are often implicit in our scientific theory.”

In 1909, California’s passage of the Asexualization Act authorized state institutions to sterilize mentally ill patients and prisoners, particularly sex offenders and those serving a life sentence. Two more laws passed in 1914 and 1917 widened the range of sterilization to encompass anyone with “hereditary insanity or incurable chronic mania or dementia.” California, whose sterilization procedures primarily occurred in mental hospitals, became home to some of the largest sterilization hospitals in the country, including Sonoma State Hospital and Patton State Hospital.

Recording more than 5,000 sterilizations, Sonoma State Hospital was California’s leading institution for the “feebleminded” in the 20th century. The hospital sterilized women deemed sexually deviant or promiscuous through procedures such as hysterectomies and tubal ligations. In the 1960s, Sonoma also conducted human experiments involving harmful doses of radiation that resulted in severe injury and even death.

While American eugenics has fallen under the shadow of Nazism, it was the impetus behind the Nazis’ demonization, sterilization and euthanasia of Jews and other non-Aryan groups. The fundamental ideas behind these acts were predicated on the belief of Aryan supremacy, a concept deeply rooted in the American eugenics movement and underpinned by prolific eugenics research funded by the U.S.

Founded in Pasadena, Calif. in 1928, the Human Betterment Foundation was a eugenics organization dedicated to compiling and distributing information about sterilization. The HBF maintained a close relationship with Germany until World War II, and the Nazis modeled their eugenics laws on the HBF’s sterilization research and legislation. The Carnegie Institute and the Rockefeller Foundation also played pivotal roles in establishing and funding eugenic institutions in Germany.

The eugenics movement lost momentum following the horrors of Nazi Germany — yet eugenic practices are not confined to the past. In 2010, approximately 148 women received unauthorized sterilizations in California prisons.

Modern eugenics has taken form in genetic engineering, a development consistent with the advancement of scientific technology. Prenatal testing detects potential health challenges and genetic variations such as Down syndrome and cystic fibrosis; in the U.S., 67% of fetuses detected to have Down syndrome are aborted. In addition, ethical conversations have surrounded CRISPR-Cas9 technology, a gene-editing tool that precisely alters DNA sequences and modifies gene function. Although CRISPR has demonstrated efficacy in curing disease in plants and animals, critics contend that CRISPR can potentially perpetuate eugenics by eliminating undesirable characteristics from the gene pool.

“The only situation where genetic engineering is understandable is if the child has some fatal disease,” junior and Intersections Co-President Riya Abiram said. “If it’s anything about the way they look and it doesn’t involve their quality of life, then it should be considered eugenics.”

Reparations and disavowals have begun, with Caltech removing the names of eugenicists Robert Andrews Millikan and Ezra Seymour Gosney from campus buildings in 2021. In July of the same year, Gov. Gavin Newsom approved $7.5 million in reparations for survivors of state-sanctioned sterilizations; approximately 600 women are eligible for $25,000 each.

“The payments to survivors that the program will provide are small compared to the harm done,” said Marcy Darnovsky, executive director of the Center for Genetics and Society. “Sadly, most of the people who were sterilized under California’s eugenics law have died, but the program helps in other ways. We really haven’t had a historical reckoning in this country with eugenics in the sense of acknowledging its persistent legacies. There’s so much more that has to be done to unpack these histories, the persistence of these ideas and the resurgence in some circles.”