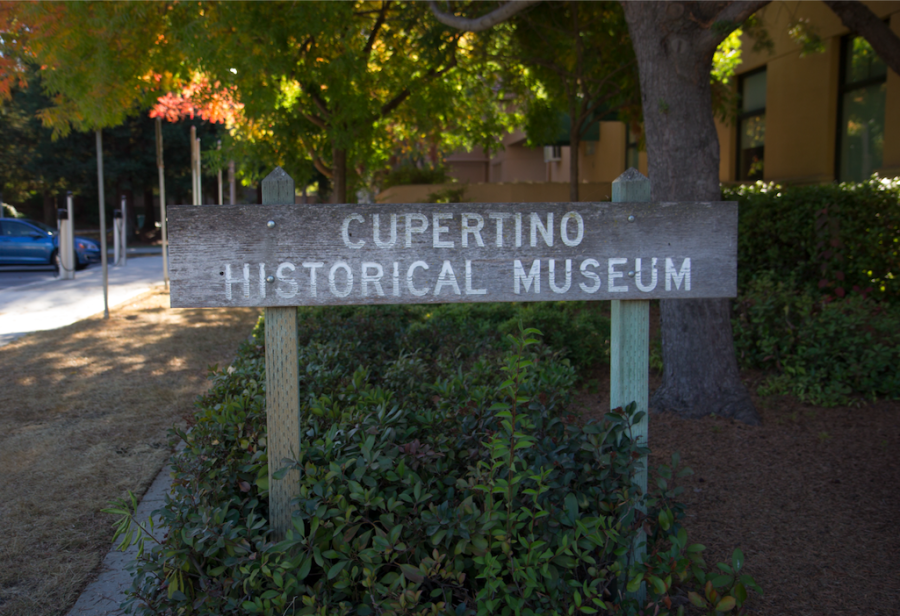 On Sept. 9, 1850, California became the 31st state to enter the union. To honor this occasion, the Cupertino Historical Society and Museum opened the “Eureka! Native Americans, Explorers and Innovators” on Sept. 9 in the Quinlan Community Center. The city was preparing for the Cupertino’s fall festival in honor of the anniversary of California’s admission to the United States of America when they approached the society to create an exhibit surrounding the theme of admission.

“We thought about it, and although we didn’t have much time, we were able to put the exhibit together,” said local Historian Gail Fretwell-Hugger. “It is about four to five displays in the museum that depict key events and settlers in Cupertino and the local surrounding area.”

The museum’s path follows a counterclockwise chronological layout beginning with the Native Americans who first inhabited the land, showcasing rugs and baskets that are representative of the Ohlone and Costanoan tribes. The exhibit also has a stone grinding bowl the Native Americans used to grind acorns and a frame containing many types of Ohlone arrowheads. Period clothing, saddles, spurs and tools from the Gold Rush are also on display. Information panels inform viewers about the history of California and the De Anza expedition under Mexican and Spanish rule. The museum has acquired costumes and saddles from the 1976 bicentennial reenactment of the De Anza exhibition.

The centerpiece of the exhibit is a stuffed bear, provided by the owners of the Barn Owl gift shop in Saratoga, alluding to the Grizzly bear on the California state flag. The bear also pays tribute to the Bear Flag Revolt, a rebellion by settlers in the Sacramento Valley for independence, and the many black and brown bears that had once lived in the area.

History San Jose, an organization that uses events, partnerships and programs to preserve the cultural heritage of San Jose and Santa Clara Valley, has also supplied the exhibit with bear traps, bear fur gloves and bear skin rugs for visitors to view and informational panels about the Spanish bear and bull fights.

Captain Elisha Stephens, the first man to bring wagons over the Sierra Truckee Pass is one of the featured figures in the exhibit. He lived around present-day McClellan Ranch and Blackberry Farm, and was the first to settle west of Santa Clara Valley. He is also the namesake of Stevens Creek. Stephens’ favorite dish was rattlesnake, so the museum has included a recipe on how to prepare rattlesnake accompanied with a stuffed rattlesnake in a glass case.

In honor of the opening of the exhibit, the museum coordinator organized a mixer for the Chamber of Commerce; around 60 to 70 people were attended. At the mixer, Haleen Davis from the rotary club spoke about the sister city program; Darcy Paul, who used to be a board member of the Cupertino Historical Society, spoke about the importance of the museum; Donna Austin, president of the Cupertino Historical Society and Museum, spoke about the new exhibit. The mixer also included a raffle for a blanket decorated with Cupertino artifacts.

“The Chamber of Commerce mixers are an opportunity for the business community to come together,” said Hugger. “It’s a nice opportunity to interact and socialize, have something to eat and drink.”

The hallways outside of the exhibit feature student entries from a recent art contest. Participants illustrated famous people, places and events pertaining to the history of California.

Hugger encourages people in the community to come out to the museum and learn about their local history.

“No matter where a person is from, it is a good idea for them to know their local history to better understand the community, to get a feeling for what came before, who settled the area, what kind of people were originally there,” said Hugger. “It really broadens a person’s horizons and people feel more like a part of the community.”

Students who are interested in learning about Cupertino’s local history are urged to sign up as museum volunteers.