Sniffing out the hidden truths behind scents

Delving into the profound psychological effects of scents 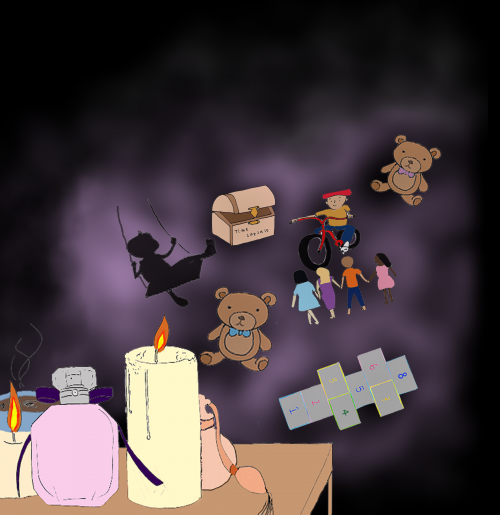 Upon entering a cafe, people are immediately hit by the strong scent of brewing coffee, its aroma relaxing their minds and filling them with warm memories. On the other hand, they are repulsed and disgusted by the odor of a full garbage can. While scent preferences may differ among individuals, certain smells often have the ability to evoke different memories or emotions.

For instance, most people in urban or suburban areas are disgusted by the smell of cow manure. For someone who grew up on a farm, however, cow manure can evoke a feeling of nostalgia. Similarly, while some Americans do not prefer the scent of seaweed, Japanese people, who have grown up eating dishes with seaweed, do not mind the scent at all.

“I don’t really like the smell of American candles or perfumes that are strongly scented,” said junior Sandy Matsuda. “I prefer Japanese scents for body and hair products, because they smell nicer and that is what I prefer based on the surroundings I grew up with.”

An individual’s country of origin, culture or personal history can affect his or her preferred smells. Certain scents may evoke memories specific to individuals, as simply smelling a childhood scent can also induce a flashback to a past memory.

“I find that I like the smell of peppermint,” said junior Heather Kong. “I think I prefer the scent because it reminds me of the little peppermints that we got before winter break in elementary school.”

The Proustian Memory Effect explains this phenomenon; this effect refers to the vivid reliving of events from the past through sensory stimuli to the brain, eliciting an intense and emotional memory of an episode from one’s childhood. Childhood memories that are linked to scent tend to stay with people, and even if temporarily forgotten, can be brought back through a trigger, such as smelling that certain scent.

A Brown University study that used various perfumes to test the recognition of a familiar scent supports the Proustian Memory Effect. Participants were exposed to a perfume of their choice and another unmarketed perfume. When they smelled their chosen perfumes, the researchers found that the hippocampus, which is strongly linked to memory, was particularly active, proving that individuals subconsciously recognize familiar scents. The study also found that smelling familiar perfumes triggered increased activity in the amygdala, the part of the brain associated with emotion, which proved that scents are also strongly linked to emotion.

Another study conducted by Eric Vermetten and James D. Bremner of the Emory University School of Medicine found that scents have the capability to trigger negative emotions in particular. This study examined participants diagnosed with Post-Traumatic Stress Disorder who fought in the Vietnam War, and found that some patients experienced involuntary upsetting feelings and memories when smelling diesel that reminded them of the war.

“The olfactory system is tightly linked to areas of the brain that are important for memory, like the hippocampus and amygdala,” said Donald A. Wilson, Ph.D of the New York University Langone Medical Center. “So odors sort of have privileged access to those areas. That is one reason why odors may be so good at evoking memories. The amygdala is also important for many emotional responses, so that helps tie odors to emotion.”

The effect of scents extends to practical uses as well. For instance, the hypothalamus, an area of the brain also connected to the olfactory system, controls hunger, sexual behavior and other basic behaviors. When one smells food, the odor can interact with his or her hypothalamus.

“This [interaction] can alert the rest of the digestive system [that] ‘food is on the way!’ and helps explain why food smells sometimes make us even more hungry,” said Wilson. “Bakeries take advantage of this by pumping out the smell of cinnamon buns into the mall so we subconsciously start feeling hungry and go looking for cinnamon buns.”

While some scents can stimulate the brain, others cause people to act a certain way after multiple exposures. Aromatherapy, the practice of using natural oils of plants for psychological and physical benefits, is a widely accepted scent-related method that relaxes the mind and the body. Most of the allegedly scientific aspects of aromatherapy, however, are unsupported by data, and its calming effects are actually a result of learned responses and expectations based on previous encounters.

“This type of [learned response] can be used in aromatherapy to, for example, help induce relaxation, but it is also being used by companies now to help in their branding,” said Wilson. “So for example, some hotels have specific scents in their lobby so that if you stay there frequently, and like the hotel, you can have a nice reaction as you enter the lobby because of the smell — even if you don’t consciously notice the smell.”

Losing the ability to process scents leaves a lasting impact on an individual psychologically. This can mean not being able to smell anything, a consequence of nasal problems or head trauma. Loss of smell can cause people to lose their sense of taste even if their tongue still functions, as most of what is perceived as flavor is actually smell. Depression, schizophrenia, Parkinson’s and Alzheimer’s are diseases in which symptoms include such smell problems.

“If you lose your sense of smell, maybe you don’t realize you left the gas on the stove on or maybe you don’t realize the milk has gone bad,” said Wilson. “Your favorite foods don’t have a good flavor anymore, so you have to put tons of salt or sugar on it to get some taste. We don’t pay much attention to smell, but it can lead to big changes in the quality of life once it’s gone.”

Whether it is a lingering whiff of perfume or the smell of a grandparent’s home, scents often affect people in subconscious ways. Ultimately, these scents serve to intensify memories of events, connect experiences with certain emotions and enhance one’s mental and physical abilities to perform daily tasks. Although often overlooked, the odor of one’s environment is actually more influential to someone’s behavior than he or she may perceive.