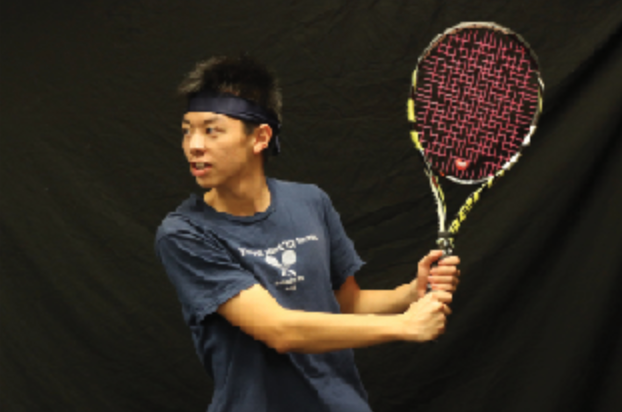 The kid in me will go out of the way in every match to hit a tweener. The man in me will spend that extra hour in the weight room training to be a stronger player.

Walking past the Lynbrook tennis courts on a lazy Sunday afternoon may yield a strange sight. A kid laughs as he bounces around the court to hit the craziest shots. On the other end of the court, a man dances behind the baseline to strike the ball with precision and power.

Upon a closer look, the kid wears a blue headband for intimidation and a t-shirt that reads, “Varsity Tennis Team. No snack no win. 0-6 0-6.” The man wears a red hat to keep the sun from his eyes and the standard team uniform — white shirt and blue shorts. The kid holds a black and yellow racket with pink strings and a Hello Kitty dampener. The man grips the same racket but with black strings and a black circular dampener.

Shoes squeaking on the acrylic surface, the kid and the man battle in a practice match. The kid plays with a smile on his face as he tries every trick in the book without much regard for the outcome of the match. He flicks his wrist to curve the ball like a banana around the net post. He slices the ball to generate enough underspin for it to bounce back over the net. He charges back to hit the ball between his legs to produce a hot dog.

Meanwhile, the man dictates every point in search of ways to break through the impenetrable defense. Years of flexibility and weight training enables him to slide on the concrete like an ice skating rink and strike the ball to produce RPGs (rocket-propelled groundstrokes). He floats to the net with impeccable footwork to produce insane pickups to start the love game.

Even though the man easily bagels and breadsticks the kid (6-0, 6-1), the kid and the man are really one person.

Six years ago, I watched on live TV as Novak Djokovic and Roger Federer locked horns at the 2015 U.S. Open. As Federer frequently defied the laws of physics, the commentators went into a frenzy.

“Call 911! Federer has just gotten out of jail with an astonishing pickup!” cheers tennis commentator Robbie Koenig as Federer lands an unreturnable half-volley. On the other side, Djokovic smoothly glides across the court from 20 feet behind the baseline, defending everything Federer threw at him.

“You’ve got to be kidding me! HOW did he win that point from out of nowhere!” cries Koenig as Djokovic does the splits while firing a backhand down-the-line passing shot.

As they played tennis near the Gods, the battle between these two greats of the sport epitomized the constant struggle within me, playing with either style or smile. Sometimes, going for that banana forehand or tweener has cost me key points in a match. Yet at the same time, there’s more to the game than going for the highest percentage shots and ending the match in the safest way. Producing these dazzling shots that light up the crowd is what fuels my desire to push my tennis prowess even further.

Looking back at the Lynbrook tennis courts, there is no difference between the kid and the man. The kid in me will go out of the way in every match to hit a tweener. He will fail miserably sometimes and hit more than just the tennis ball. The man in me will spend that extra hour in the weight room training to be a stronger player. He will pick up Djokovic’s flexibility, Federer’s grace and Nadal’s grit.

Despite the fundamental difference in mindset, we both love the rush of adrenaline of hitting a down-the-line, no-look tweener and the fresh smell of victory, serving fresher bagels, breadsticks and hotdogs than the cafeteria. The kid may play to land crazy trickshots, and the man may play to dismantle opponents. But we both play to enjoy the masterpiece of the tennis game.

And they will always live in harmony.