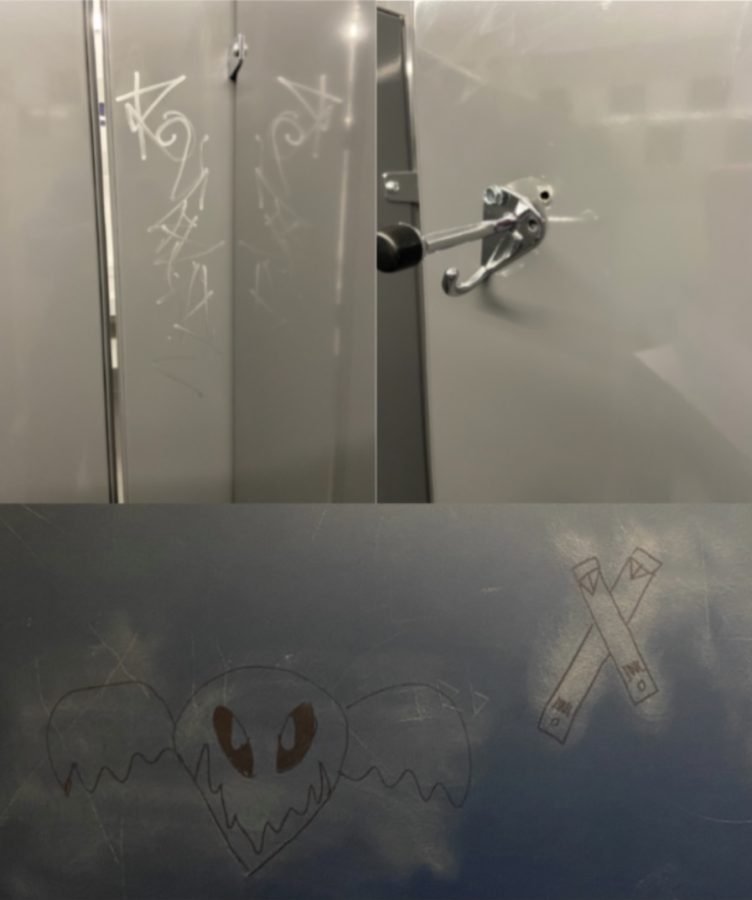 In early September 2021, Lynbrook bathrooms were missing soap dispensers and featured graffiti and disassembled sinks. Cases like these took place almost every other day throughout the month, which is also when the TikTok trend “Devious Licks” went viral.

“I was looking at the bathrooms and saw that there was a bunch of graffiti and scribbles with markers,” sophomore Suchir Vyasamudri said. “The bathrooms looked really messy at the time.”

The goal of each devious lick is to commit a grander instance of school bathroom vandalism than the previous act. The trend has influenced instances of bathroom vandalism and theft have occurred at all other FUHSD high schools and at many schools across the country.

“Personally, I don’t think social media was responsible for this,” facilities manager Edgar Dueñas said. “It’s more about the individual making a conscious decision to participate in this TikTok trend.”

“It’s the students’ judgement to go out there and vandalize the school,” Vyasasmudri said. “People think this is funny and don’t understand the consequences for other students in the school. The bathrooms were closed for a while, so it was hard to find a free bathroom to go to during the month.”

Lynbrook custodians spent eight hours a week in September repairing the bathrooms. It cost approximately $1,000 to fix all damages, in addition to paying the custodians extra money for their additional time and efforts. Luckily, no parts were stolen from the disassembled sinks, so very few repair kits needed to be purchased. The graffiti, on the other hand, was difficult to remove, and custodians spent hours scrubbing to remove it off the walls.

“We found and fixed some components from sink faucets that were missing due to vandalism,” Dueñas said. “It was about $375 in parts to replace the missing components in the Lynbrook restrooms since you can’t buy some specific items as individual pieces — you need to buy it as a set of pairs. Due to the time we spent cleaning the graffiti, custodians had less productivity and could not focus on their regularly assigned duties.”

Bathroom vandalism of this severity has never occurred at Lynbrook in past school years. Many staff members are shocked that students have gone so far as to destroy school property.

“Sadly, this is the most vandalism we’ve seen, and that is the case for a lot of schools in the area,” Assistant Principal Eric Wong said. “Kids know better than us for who’s doing this, and if they are okay with having bathrooms locked or making custodians go through this, that is very disappointing.”

Wong encourages students to do their part to prevent further vandalism of school property.

“If you see something, say something,” Wong said. “That culture of standing up for what’s right is really important.”

Since many of the bathrooms were closed, students had to walk around campus to find an open one. Because of a reduction in serviceable bathrooms, many students missed or were late to class and had less time to enjoy brunch and lunch.

“I think it’s important to make our rules clear and show what should not be tolerated in the school,” Vyasamudri said. “We are supposed to be a caring community. We just need to promote a positive message.”

In the last few weeks, Lynbrook has been a very clean and safe campus, and no new incidents have occurred. If students see any destruction on campus, they are encouraged to report it to Principal Maria Jackson, Executive Assistant to the Principal Maya Baba or Assistant Principals David Erwin, Susan Rocha, Yukari Salazar and Eric Wong. Students can additionally go to school therapist Jenna Starnes or guidance counselors Nikki Dang, Malissa Goldstein and Shana Howden. The faster such sightings are reported, the faster the school can fix it and hold students accountable.