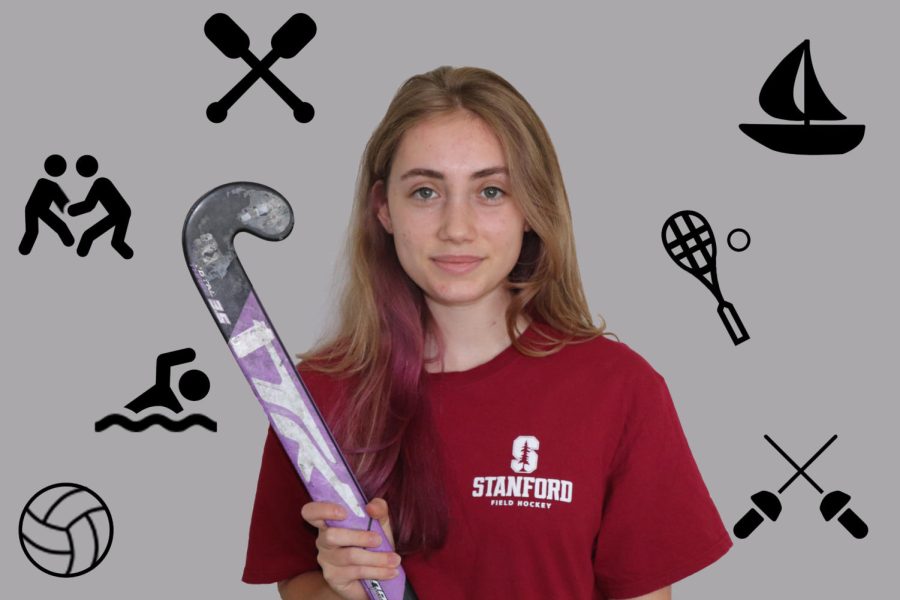 Field hockey, rowing, sailing, fencing, squash, synchronized swimming and men’s volleyball were among the sports announced to be cut after the 2020-21 season. (Graphic Illustration by Emma Cionca.)

When I was 9, I attended my first Stanford sports game, a women’s basketball tournament. Since I wasn’t the most interested in athletics growing up, I didn’t completely understand what was going on during the game. Nonetheless, it was a thrilling experience that I remember to this day because it was the first time I got to see collegiate athletes play live. There is nothing that can replicate the electrifying feeling of sitting in a bustling arena of fans as the game unfolds, play after play, right in front of you. Sure, you could watch it on television or the livestream after, but witnessing it first-hand in a stadium is a whole other experience.

As I grew older, I tried to involve myself in more sports, and I started playing field hockey in high school. The Lynbrook field hockey team comes with its fair share of traditions, one of which is attending Stanford field hockey games as a team bonding activity. Consequently, many of us on the team were devastated when we found out Stanford was planning to cut its field hockey team.

Along with field hockey, ten more sports — rowing, sailing, fencing, squash, synchronized swimming, wrestling and men’s volleyball — were announced on July 8, 2020, to be cut after the 2020-21 season. Stanford cited a $70 million deficit over the next three years as the cause, influenced in part by the pandemic.

Just like the athletes at Stanford, we here at Lynbrook were completely blindsided by the news. Within days, there were posts circulating on Instagram with petitions links to reverse the decision. I remember signing a couple of petitions myself, wondering whether it would make any difference. I’m proud to say that it did — at least partly. On May 18, Stanford reinstated all 11 sports after discussing the possibility through a board meeting on April 26th.

The day the news broke, I received several exciting text messages in our field hockey group chat about how Stanford was keeping its team. Before Stanford reinstated its sports, I thought the movement was a lost cause, but as cliché, as it sounds, the experience was really a lesson in perseverance. None of the teams ever gave up protesting to keep their sports, and in the end, the effort was worth it — Stanford reinstated their sports. It really opened my eyes to the level of commitment and love these athletes have for their sports, and how lucky I am to play for a school that has so much support for athletics. Many of us at Lynbrook took to social media to repost the news on our stories, glad to be able to keep a tradition so dear to us.

Every year, we attend Stanford field hockey games, both to learn from the players and to bond as a team. Attending these games helped me get close to players in my grade, and get to know upperclassmen players, who we didn’t  normally practice with. Since it was an imperative part of being on the field hockey team, the tradition even continued amid the pandemic, when our team drove up to Stanford to watch the Stanford vs. Cal game.

Watching college athletes play was inspiring, and I became motivated to learn from them. Their playing style was different and much more advanced than ours, but that didn’t mean the other Lynbrook players and I couldn’t learn from their strategies and moves. In freshman and sophomore year, we watched Stanford players do amazing sweeps and reverse sweeps across the width of the whole field, and everyone immediately took interest in learning how to do those moves too. Personally, it took me longer than the rest to learn those sweeps, but I’m proud to say that now, in junior year, I’m able to sweep almost the entire width of the field.

Stanford’s presence as a team pushed ours to work harder, and I’m glad the Lynbrook field hockey team will be able to continue attending these games together. It’s a special experience that no other team bonding activity can provide. Stanford sports, as distant as they may seem from Lynbrook, have all kinds of connections to local athletes and continue to inspire and motivate people like myself.