Acknowledging the complexity of our Asian American experience 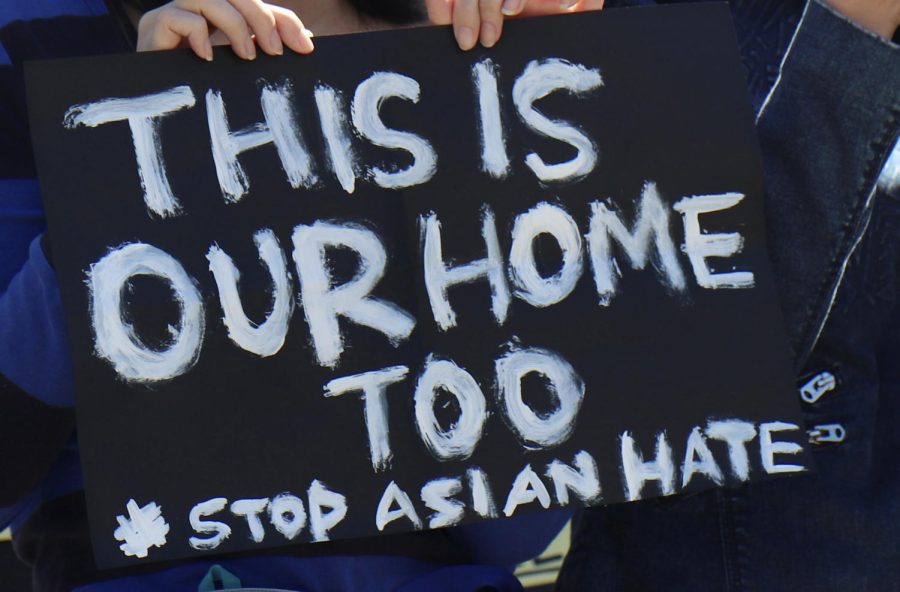 Hundreds of people gathered in front of the Saratoga City Hall to protest AAPI hate on March 27, holding signs with powerful messages like the one pictured above.

At Lynbrook, one of the most predominantly Asian high schools in the country, the recent surge in anti-Asian hate crimes has hit heavily. Many feel shocked, fearful or angry at the atrocities committed in a country many of our parents and grandparents thought would grant us a better life. Now is a moment not only to process those emotions, but also to reflect on the complexity of our identities as Asian Americans and take action for justice and equality.

The myth that Asians do not experience racism, or that the stereotypes they face are positive, is extremely prevalent, but the truth is much more complex. Due to the model minority myth, Asians are assumed to be intelligent, particularly in STEM, business and law fields, while other minorities are often stereotyped as less capable in terms of both intelligence and work ethic. This can serve as an advantage in education and employment, helping Asians gain recognition for the work they do, but it can also reduce their accomplishments to a function of their race rather than their effort and exacerbate academic pressure on Asian students.

“On the outside, people might not think the [model minority myth] is that bad,” said junior Pranay Mamileti. “But once you start living under those expectations, you start seeing them less as a joke and more as an expectation. I really do feel responsible to achieve, and I feel like I’m letting people down if I get bad grades.”

This already complex dilemma is further complicated when breaking apart how different groups of Asians are affected by different stereotypes. South Asians, Southeast Asians and East Asians all struggle with stereotypes of intelligence, the model minority myth and media misrepresentation, but other challenges are distinct to each group. For example, South Asians have continued to experience reactionary hate since the War on Terror, while East Asians and Southeast Asians have been targeted as scapegoats for the COVID-19 pandemic. Even Asian Americans from the same regions have vastly different experiences — due to immigration laws, median income level and education differ greatly by country of origin. And like every other minority, Asian Americans must straddle the line between assimilation into white culture and preservation of their heritage.

Clearly, the Asian American experience is not simple, nor is it the same as any other group’s experience. And yet, as activists have pointed out, a culture of silence persists. Many within the Asian American community feel that it is less vocal overall than other minority groups about issues of equality and social justice.

The reasons for this are many: first, the model minority myth perpetuates the idea that Asians do not face hardship as a result of their race, leading many to feel uncomfortable standing up against injustice. The promotion of filial piety and obedience in Asian culture may also cause Asian Americans to refrain from standing up. Another factor is the generation gap, or the cultural difference between older and younger Asian Americans. Many older Asian Americans are first-generation immigrants, many of whom came from even more hostile environments. For these individuals, the Anti-Asian violence in America may seem like a small price to pay in return for economic stability and opportunities. Many of these immigrants arrived in an America that was resistant to change — to them, speaking out about Asian-American issues may feel futile or even dangerous.

“It was different for our parents, who had to immigrate when there was a lot of discrimination,” Mamileti said. “And because of that, they’re afraid to lose it all. If you’re an immigrant [going to a protest] and you get arrested, you don’t just spend some time in jail; you could get your visa revoked. In general, the stakes are very high. They came to America when things were much worse, and they idealized a flawed version of America; it makes sense they would rather deal with the challenges than risk a fight to end them.”

But our generation stands at a unique crossroads in Asian American history: American society is more amenable to change than it has ever been, and today’s Asian American youth is less tolerant of injustice than ever. The rise of social media has made it easier to build grassroots movements across the country, and amid a surge in anti-Asian violence, these movements have begun to grow. Every person who stands up to AAPI hate gives courage to the next, building momentum and strength.

“When the past generation came over to the United States, putting their heads down and powering their way through work seemed like the easiest thing to do in the face of adversity,” senior Vijaya Kukutla said. “But now we’re here, we’ve established ourselves, and this is our home too.”

We have a responsibility to act with courage and rise to the occasion. We cannot rely on individual activists to make a difference; we, the community, need to act as a collective. This does not only mean confronting AAPI hate in the news; it means confronting racism in our daily lives to the best of our abilities. Standing up may seem risky, but it is much easier in a community that has decided to end its silence and speak out together.

“I’ve talked to some people who are Asian who truly believe that other races simply cannot perform better than them, academically or professionally,” said Class of 2019 alumnus Brandon Qin. “In general, I’ve noticed that areas that have people who have never been exposed to different racial demographics typically hold those biases the most.”

Much of this prejudice stems from the internalized model minority myth and from the belief that Asians value education more than other cultures. Since Lynbrook is attended by predominantly Asian students and is academically competitive, the environment we live in reinforces this misbelief. It is a very dangerous and inaccurate assumption to make, though.

“There are no cultures that exist in the world that do not honor and respect knowledge and that do not value a better life for their children,” said Dr. Lisa Hirai Tsuchitani, a faculty member of UC Berkeley’s Asian American and Asian Diaspora Studies Program. “To say that [valuing education] is a uniquely ‘Asian value’ needs to be questioned.”

It is equally important to confront our own internal biases about each other and understand that every Asian American has a different experience with culture, discrimination and identity. For example, not all students are deeply connected to more traditional parts of Asian cultures, like language or religious customs, particularly if they grew up in a more Westernized environment. Rather than deriding less or more assimilated students, we should acknowledge and respect that many Asian American students may have evolving relationships with their identity.

Students who are less Westernized face different pressures. Stigma against less-assimilated students partly stems from many Asian American youth embracing assimilation over cultural background and traditions. This is understandable to some extent: Asians’ success in America, particularly in past generations, has often depended on their ability to assimilate. In addition, people naturally gravitate away from anything different, and in an environment where many Asian Americans are Westernized, expressing cultural traditions may feel different.

Today there remains great pressure to act Westernized, both in the workplace and in social situations, even when surrounded by other Asian immigrants. In fact, the tendency to express Asian heritage in a way that is accepted by Western culture is so frequent that it has been termed “boba liberalism.” Certain East Asian and South Asian cultural imports have become integrated into mainstream Western culture, such as boba, K-pop, Bollywood dancing and samosas, whereas others are perceived as foreign.

“I used to wear coconut oil in my hair to school in elementary school and I wouldn’t really mind back then,” Kukutla said. “Once I came to high school, I never wore it to school and if I ever had it in my hair, I’d make sure I wash it before I come to school, because it’s not normalized here. I think there’s a certain connotation that it’s dirty when in reality it’s not, it’s just a different form of a hair product.”

Even something as simple as names create confusion and mispronunciations force assimilation.

“It’s weird because there’s complicated American last names that people manage to pronounce but I’ve seen people be given a five letter Asian name and they’re like ‘Can I call you your first letter for short?’” Kukutla said.

Embracing Western culture is not an invalid expression of identity, and neither is embracing Asian traditions. By fostering divisions within our own communities, we contribute to the endless cycle of xenophobia against Asian Americans. We should actively work to dismantle discrimination, not further perpetuate it.

Additionally, acknowledging the complexity in all of our identities, particularly by learning about our backgrounds, is an important first step in removing prejudice against those who interact with their cultures differently.

“Know your history; embrace your history.” Tsuchitani said. “Sit down with your parents, and ask them what their migration stories were to this country — what their hopes and dreams are for you. And, think about that history relative to what you want your legacy to be.”

Creating a community that supports those conversations, therefore, is paramount to progress. At Lynbrook in particular, we can begin by standing up for one another when bigotry of any kind rears its head. We can be more accepting of different people’s relationships with their culture, doing away with the present stigma against less-assimilated students. We can move the needle toward equality and tolerance in a way our parents’ generation never could.

The time for action is now. We can’t let it pass us by.